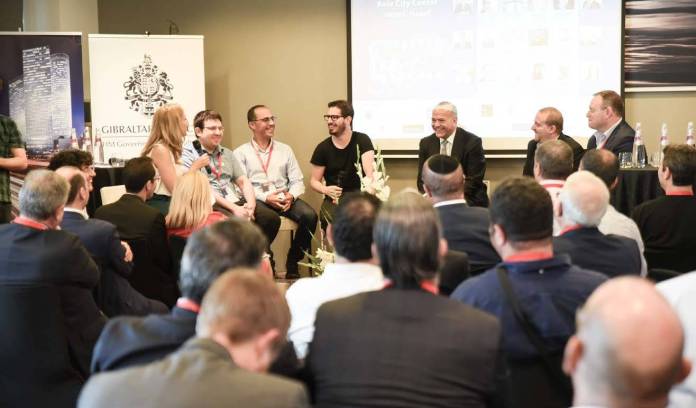 And boy what an event that was!

It all started just a few months ago, when I presented the idea of holding a Gibraltar Day in Tel Aviv to the Minister of Commerce of Gibraltar – Mr. Albert Isola,” says Ayelet Mamo Shay, Chairwoman of Gibrael Chamber. “No, I did not invent the wheel, such amazing Gibraltar Days have already become a tradition in places like London, Zurich, Singapore and Hong Kong, but as a proud patriotic Israeli who loves Israel on the one hand and Gibraltar on the other, I thought it a must to bring such event to Tel Aviv. Minister Albert Isola and his amazing team, including the lovely Mr. Paul Astengo, were very enthusiastic about the idea and so we put the wheels in motion.”

Indeed, according to Minister Isola, such event has been “long overdue”.

So what did the event comprise of?

Minister Albert Isola arrived in Israel for a series of meetings and was present at the various events.

In total, more than 100 people arrived from Gibraltar to Israel making it the biggest ever attendance of Gibraltarians in Israel.

There was a lavish cocktail reception evening, hosted by Minister Isola, at the Crowne Plaza Azrieli Centre hotel at the heart of Tel Aviv’s financial district. The reception was attended by hundreds of top business people who enjoyed a brief video presentation of Gibraltar along with sumptuous food and our very own Gibrael Twister cocktail!
A busy Gibraltar Day conference focusing on the cryptocurrencies and Blockchain sector, with panels featuring 24 top speakers and moderated by the super energetic lady, Meirav Harel. The conference day attracted some of the leading names in the Blockchain sector, including professionals from Israel’s biggest blockchain investment group: Alignment-Singulariteam Group; Israel’s biggest crypto exchange- Bit2C, Deloitte Israel, Meitar Law Firm, the Israeli Bitcoin Association, Shine Law Firm as well as dignitaries from the Israeli Ministry of Economy.

A networking lunch which was over-subscribed, so much so that we had to turn people away.

Plenty of B2B meetings in the specifically designated meeting room.
To coincide with the Gibraltar Day events, a friendly rugby match was held between the national teams of Gibraltar and Israel at the Wingate Sports Centre in Netanya.

“It seems that the buzz about Gibraltar was all over Israel. Business people were flocking to the event from all corners of the country and we had to put people on waiting lists as the demand completely exceeded capacity,” says Gibrael President Eran Shay.

From the Gibraltar side too, there were plenty of companies present, including some of the sponsors of the event such as Hassans International Law firm, ISOLAS Law Firm, Continent 8, Sovereign Group, Rockolo, Gibtelecom, Ramparts Law Firm, Benefit Business Solutions, Sodi-Connect, and the GSX/GBX Group.

The Gibraltar Day events were complemented by a business delegation headed by Gibrael Chamber who visited the cities of Haifa and Jerusalem. In Haifa – home to Israel’s largest hi-tech park, delegates have visited the offices of one of Israel’s leading fintech law firms – Doron Tikotzky Kantor, and then visited MATI – one of the city’s key technology accelerators. The delegation was then hosted for lunch at the Haifa City Hall where they met with several city councillors. In Jerusalem, the delegation visited the offices of Yigal Arnon & Co, one of Israel’s largest law firms, followed by a tour of the Israeli Parliament (the Knesset) and a meeting with the Jerusalem Chamber of Commerce. They then visited some of the world renown holy sites in the Old City. Delegates were amazed by the Israeli hi-tech ecosystem and business community and vowed to come back to Israel in the nearest future.

With plenty of Israeli companies already doing business on the Rock, be it in the online gaming sector, Blockchain ICO/DLT sector, software development, renewable energy, funds and others, Gibraltar is certainly enjoying the stream of Israeli businesses coming over and the Israelis could not have found a friendlier partner to do business with than the Gibraltarians. Such relationship is bound to continue and strengthen and the plans for the second Gibraltar Day in Tel Aviv have already began!